Grand Opening Ceremony of the Terminal

In July 18, 2014 the grand opening ceremony of the terminal in the North Korean port of Rajin, which is the part of Rason Special Economic Zone, was held.

The terminal is a modern high-tech multifunctional complex with a capacity of handling up to 5 million tons of cargo per year.

As it was mentioned by the president of the Russian Railways JSC, Vladimir Yakunin, the opening of the terminal completed the pilot part of the project for the reconstruction of the Trans-Korean Railway.

"Today we can witness the loading of the first vessel with Russian coal. We believe that the time will come when the flags of vessels of all countries of the world will be flown in the raid of the port of Rajin" said the president of the Russian Railways at the opening ceremony. "Now we can handle up to 90 wagons per day, and in a year this volume will increase to 200," said Eugene Sokov, the head of the production complex of RasonConTrans JVC (a subsidiary of the RZD Trading house and the port of Rajin).

- The company is planning to carry out dredging works, which will allow the port to accept large ships of deadweight up to 54 thousand tons (with full load capacity). The opening ceremony was attended by a delegation from South Korea. Its’ representatives expect to invest in the project about 200-300 million dollars. The possible investors today is a consortium of three South Korean companies - the Korail railways corporation, POSCO Steel and a large transport company Hyundai Merchant Marine. Together with RZD, they began to work out a mechanism for the further implementation of the project in the format of trilateral cooperation, which in the future will create favorable conditions for the restoring of the through rail connection with the Korean peninsula with access to the Trans-Siberian Railway."

North Korea does not object against joining of the southern investors to the project of RasonConTrans JVC. Vladimir Yakunin reiterated that the successful implementation of one of the priority projects of Russian-Korean trade and economic cooperation will contribute to strengthening the ties between Russia and the DPRK, improving inter-Korean relations and ultimately promoting peace and security on the Korean peninsula. 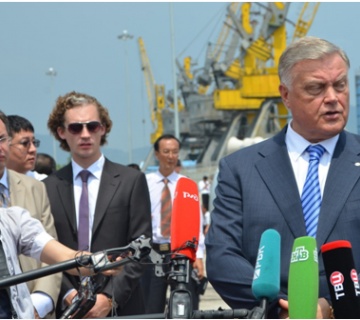